We invite you to The Empire music hall for a night you’ll never forget. But tonight’s show will be a little different as the club’s owner has fallen victim to a murder most foul… but whodunnit?
Could it be nervy knife thrower Ray the Blade; sexy Siamese Striplets; The Cerberus Sisters; deranged ventriloquist Albert Frog; macabre mime artist Gaston Gasteau; or perhaps the mystifying magician – The Great Mephisto… Everyone’s a suspect as we discover the secrets of all the weird and wonderful acts who have found themselves upon The Empire’s bill.
From the team behind the multi-award winning The Terrible Infants, Ernest and The Pale Moon, The Trench and Olivier nominated Alice’s Adventures Underground – Murder, mystery and mayhem combine with Les Enfants Terribles’ dark, twisted wit and inventive theatricality as they present their musical extravaganza to celebrate their fifteenth year.

THE TIMES ✮✮✮✮
(Critic’s Choice) It could be cheesy or sick: too many retro performers think that dressing up is enough. But in the hands of Les Enfants Terribles, this is a perfect miniature musical. Oliver Lansley’s lyrics are sharp, phrased to set the period, but knowing and smart enough for now. Tomas Gisby’s breezy pastiche music and brisk direction by Elgiva Field and James Seager deliver 90 minutes of sharp storytelling. The show feels descended from the Sondheim of Sweeney Todd, its humour dark but invigorating; the violence is kept on a cheerful Hallowe’en-ish level and framed in affection for a time when music hall aimed to amuse working people at the end of a hard week — as this team is doing right now, cheering up young commuters. Quick changes whirl us through each tale in a visual feast of semi-accurate and ornately sinister Edwardiana.

TIME OUT ✮✮✮✮
(Critic’s Choice) They used to say variety is dead. The current cabaret boom put that particular rumour to rest; now ‘The Vaudevillains’ turns the tables altogether and makes a variety show into a killer. Over its unbroken 90 minutes, Les Enfants Terribles’ Grand Guignol musical whodunnit unfolds their back-stories with wit, style, imagination and a splash of crimson. Its deliciously grisly sensibility is cohesively realised through inventive staging, beautiful costumes and design, lusty performances and rollicking music. They should make a killing.

TELEGRAPH ✮✮✮
The Vaudevillains [sic] proves something of a find. It strikes me as a cult hit in the making and it suits this former music hall perfectly. (It) comes over like an endearing mixture of The Good Old Days and a game of Cluedo, with the addition of a macabre and sometimes scabrous humour that is all its own.

WHATS ON STAGE ✮✮✮✮
The entertainment value is doubled as the cast members switch deftly between showcasing their cabaret skills and supporting the band as versatile instrumentalists. The largely rhyming script is fast-paced…. the high quality and inventiveness of each performance – be it magic, ventriloquism, mime or strip-tease – is undeniable, making for a dark-humoured and memorable evening’s entertainment.

BRITISH THEATRE GUIDE ✮✮✮✮
From a jaunty opening number straight through to the explosive finale, every moment was filled with laughs, wit and charm. The production never ceased to amaze; the heady mix of old-school japery and genuine fun being had was addictively overwhelming. Lansley and Gisby tell a good, fast-paced story and have a real sense of theatricality and the theatrical possibilities of each of the characters, which is one of the best things about the show. What’s also really fabulous is the music. The whole thing is done with real panache, and looks great. Les Enfants Terribles have created a showstopping musical comedy that frankly could have swept the entire Festival by storm.

MANCHESTER CITY LIFE: ✮✮✮
Inventive, very silly and often quite amusing, The Vaudevillains is a Victorian-music-hall-spoof-revue-cum-gothic-murder-mystery that borrows ideas shamelessly from all over the place but ends up as something pretty original. Performed by a cast of 10, plus a band, the multi-talented performers inject plenty of energy and enthusiasm and the seating around tables arrangement turns The Lowry’s Quays theatre into an intimate cabaret-style venue that suits the music hall setting perfectly.

LONDON FESTIVAL FRINGE ✮✮✮✮
What is apparent throughout this all-singing, all-killing romp is the joy of the artistry behind it. The creators have fastidiously presented a beautiful and grotesque little music box for us. Undercurrents of dysfunction abound, but such a wealth of pretty colours too, oh and ukuleles.. Live music, a decent helping of Death, a gallon or so of facepaint, and an assortment of freaks with murderous motives. Roll up and tip your top hats to Vaudevillains by Les Enfants Terribles. Rammed full with fabulous one-liners, and quirkily presented character pieces, I didn’t really mind Who actually dunnit, as I was too busy enjoying the conceit that allowed us to peer into each individual’s blood-stained history. And the slick yet emotive group number, “Betrayed” towards the end solidifies this company as one that is worthy of a watch indeed.

EXEUNT ✮✮✮
A fast-moving, frenetic, and wickedly entertaining evening. The tales unfold quickly and slickly, keeping the show rattling along at a gallop with twist piling upon twist. Each role is brought vividly to life, colourfully if broadly painted, by a talented, engaging and energetic cast, many of whom take on multiple roles. Sam Wyer’s design is beautiful and a real boost to the production: imaginative and evocative sets, stylish costumes and smart staging recall both the heyday of music hall and also its decline, while cleverly tapping into its inherent creepiness. At a brisk 90 minutes, The Vaudevillains barely pauses for breath, and directors Elgiva Field and James Seager keep the pace tight and the tension high.

MUDKISS
“The Vaudevillains” is brought to us by the excellent theatre company Les Enfants Terribles; their latest colourful tapestry of music, mayhem and madness – They are already becoming seasoned veterans of the genre with previous productions winning them awards, critical acclaim and new fans in every corner of the world. Bonding all of this together and delivering a tightly structured and wonderfully entertaining show is writer and artistic director Oliver Lansley. All in all a wonderfully original and entertaining slice of Victorian Music Hall with a difference and a damn fine night out!

FEST ✮✮✮✮
Les Enfants Terribles don’t do things in half measures. With a single performance of Vaudevillians at this year’s Fringe, there was but one chance to impress a highly expectant crowd as they took over the Pleasance Dome for the night. They did not fail to impress. Their multitude of cabaret -style skills is presented through a musically-dominated narrative as we are taken through the various acts. Their varying musical talents are tone-perfect and when combined with their array of accompanying musicians, create a mesmerizing acoustic production. But there is more that makes this performance so exciting. The dark comedy tone, superb alliterative narration from The Empire’s master of ceremonies and an engaging storyline that combines elements of the macabre, humour, murder-mystery and a plethora of plot twists combine to create a production that is fitting for its grand stage.

HAIRLINE ✮✮✮✮✮
As with previous productions, the show benefits greatly from the masterful words of Oliver Lansley, who this time joins forces with Tomas Gisby to create a tightly structured and wonderfully executed musical of corruption, murder and vaudeville. The Vaudevillains is a superlative production from the best theatre group to ever grace the Edinburgh Fringe. Celebrating their tenth year, Les Enfants Terribles has surpassed its own excellent standards, making The Vaudevillains perfect in every possible way.

BROADWAY BABY ✮✮✮✮✮
Ladies and gentlemen, please put your hands together for Les Enfants Terribles’s exquisite world-class exclusive vaudeville extravaganza. Beautifully paced, the murder mystery framework gives the usual vaudeville format a deeper sense of motion and allows the magic, miming and freak-showing that is par for the course in vaudeville to take on new significance. All the elements of a great show are present and correct and the level of detail and stagecraft from the misplaced lipstick on the triplets to the saxophone-playing surgeon is as inspiring as it is entertaining. Les Enfants are a force to be reckoned with.

EDINBURGH SPOTLIGHT ✮✮✮✮
The atmosphere before The Vaudevillains, Les Enfants Terribles’ one-off show at the Pleasance Dome, was more like being at a rock concert than a theatrical production. It is easy to understand the devotion from those who lap up their macabre and grotesque patchwork, sewn together with cleverly-written and excellently-played music. The Vaudevillains is a gloriously over-the-top gothic musical. As The Vaudevillains drew to a close and its mysteries revealed, we were present at the birth of another deliciously dark and twisted classic from Les Enfants, and one that – if played in a more suitable venue – is most definitely five-star material. 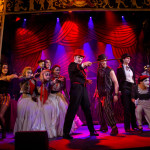 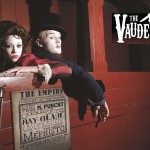 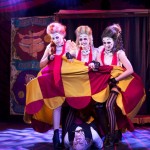 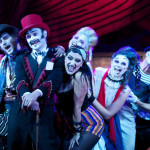 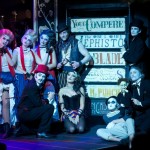 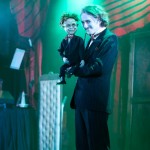 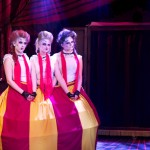 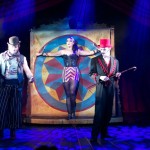 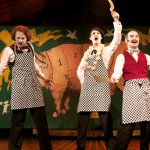 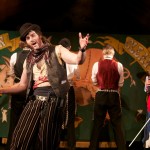 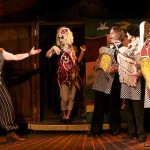 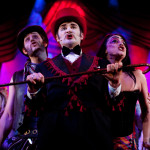 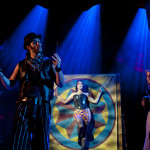 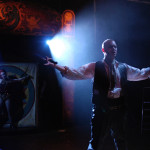 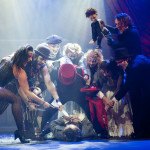 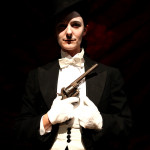 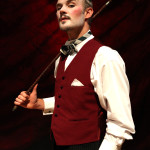 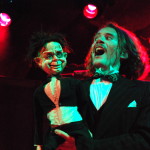 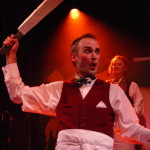